Tactical trends in the women’s 800m 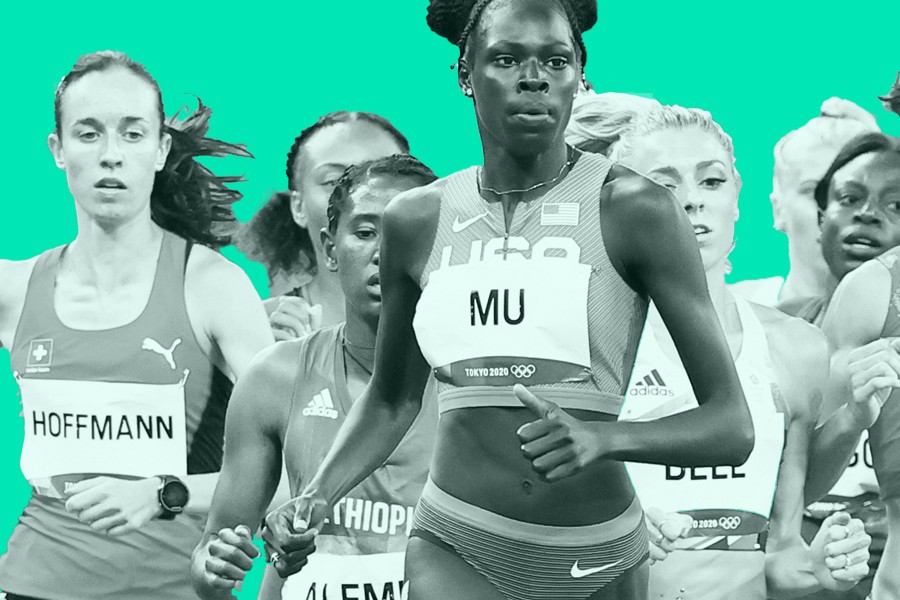 It’s fast and it’s tactical. The 800m is the fastest individual event where athletes share lanes, opening it up to multiple tactical nuances. Rarely does an athlete have the luxury of “running on the rail” of the inside lane and complete the exact distance like their sprinter counterparts.

To scratch the surface of what goes on in a major championship race, we’ve analysed nine Olympic and world championship finals in the women’s event since 2008. We have tracked the positions of the ultimate medallists at two keys points in the race. First at 400m, the half-way point, and then at 600m entering the final bend before the finish.

In this map, we show the aggregated placing of medallists at those moments. For example, 25.93% of the athletes in first place at 600m went on to medal. 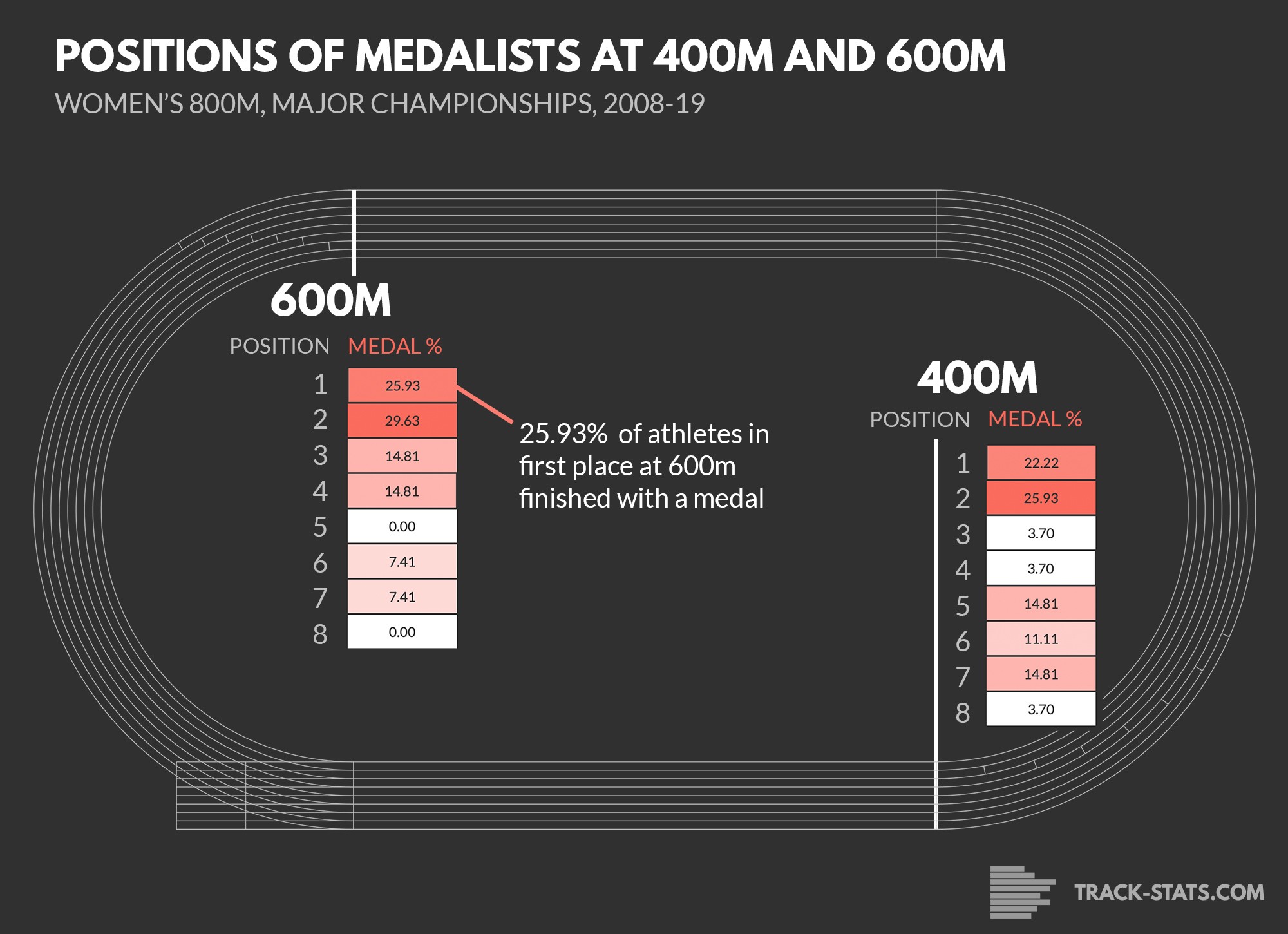 This captures the race “as it was” and how athletes were reacting to each other, so it includes three disqualified performances (Savinova and Poistogova from London 2012 and Moscow world champs, 2013).

Sitting in at places 5th-7th at the end of the first lap was more likely to result in a medal than being in 3rd or 4th. This may be athletes going with a lead group and this impacts the end-part of their race. No athlete has been in 8th/last position at 600m and gone on to medal in our sample—and remarkably no woman has won a medal when positioned 5th at this point.

There are some notable examples of building from the back of the pack. Morocco’s Hasna Benhassi (Beijing 2008) and Britain’s Jenny Meadows (Berlin 2009) both employed a similar tactic: positioned at the back in 7th place with one lap to go, and then moving up to 6th and drifting outside of lane one at 600m to obtain a striking position. Both ended their races with bronze medals. More recently, Raevyn Rogers (USA, Doha 2019) was in the back group in 7th place at 400m and 600m, before moving out with 200m to go and finish with a silver medal.

As part of the analysis, we looked at whether an athlete was running “tight” in lane one or drifting out—often to get in a position to move up in the field. Around half (51.85%) where tight on the inside of lane one at 400m, but this moved up to 59.26% at 600m. Being on the inside of the lane at this point improved the overall chances of a medal.

This positioning matters; it means an athlete doesn’t have to run wide (and further) on the final bend. This inside lane running was excellently demonstrated by Canada’s Melissa Bishop-Nriagu when she took silver in the 2015 Beijing world championships (although she was almost tripped as a result of operating in a congested area with 180m to go, so it is not without its risks).

While being a front runner at 400m and 600m was one of the best places to be to end with a medal, it was actually second place where the odds are the best. There were only two athletes in the sample who came close to a “gun-to-tape” victory (mostly leading start to finish); Pamela Jelimo (Beijing 2008) and Caster Semenya (Berlin 2009).

In this time period, we have to make a special mention of Caster Semenya. Like David Rudisha in the men’s event, she would have influenced heavily the tactics being employed. During the championships she won her races in many different ways, including positive splits (first lap faster, Berlin 2009) and negative splits (second lap faster, Rio 2016 and London 2017). Alongside her leading strategy in Berlin, she also won gold in London 2017 after being 6th at 400m. In London 2012, where she won an initial silver (promoted to gold), she was at the back in 7th with 200m to go. The wide-open race in Doha 2019 was a very different affair and we might have a similar situation in Tokyo 2020. Who’s going to step up?

Athing Mu looks in good form for the win. She is a comfortable front runner (with world-class 400m speed). At the US Trials from 400m she was in the top 2 positions, indeed she posted a 28.49 closing 200m (see our article on pacing strategies). She may even have been accelerating in these closing stages. This, coupled with her unofficial negative split at the Michael Johnson Classic when she broke the NCAA record, may suggest that her pacing approach could improve. Saying that, running a 1:56.07 and having room to improve is an exciting place to be, or perhaps she is set to be the athlete that shapes the field around what she wants to do.