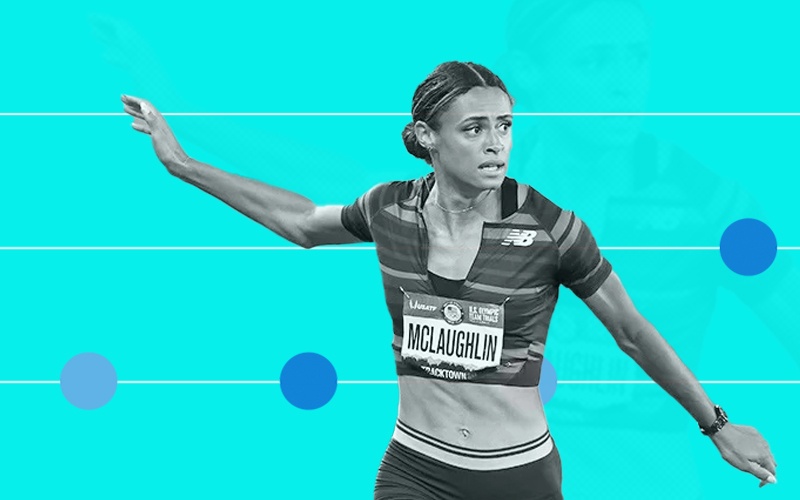 Their last three races have produced three world records. Sydney McLaughlin vs Dalilah Muhammad is one of the best rivalries in track and field today, but it’s Muhammed who has been more dominant in head-to-heads and taking the records. Are we seeing the balance begin to change?

In the combined 30 hurdles from those three races, McLaughlin has been behind Muhammad for 29 of them—only taking the lead on the final hurdle in the US trials to be the first woman under 52 seconds in the event. We know Muhammad gets out hard, while McLaughlin finishes strong; her time from the last hurdle to the finishing line in the trials (5.40) was just short of the fastest ever—the 5.39 that she set in her world junior record.

Overall McLaughlin is going to run a more even race between the two; it’s a question of whether she can rein in Muhammad over the final hurdles. At the US trials she did it, moving into the lead at hurdle 10 as you can see from the splits.

The circumstances are different from their last meeting in the 2019 world championships. The victor in Doha that time, Muhammad has had an interrupted season contracting covid-19 and even clocked a 55-second race in her first outing of the season. To come down to 52.42 in time for the trials is an incredible turnaround (previous splits suggest it’s the first half of the race that will become sharper in Tokyo). Muhammad ran “her race” in both Doha 2019 and Eugene 2021: consistently putting together 15 strides from the second to eighth hurdle, dropping to 16s for the last two meaning a temporary switch to her weaker left leg.

It’s McLaughlin who has evolved from Doha. In 2019, you might recall in the run up to hurdle eight she drops to 16 strides (one hurdle before Muhammad makes the switch) and has to use to her weaker left leg for two of the final three hurdles. It’s a noticeable adjustment despite a strong overall finish.

You can see how this is ironed out in her stride pattern. These charts show her strides and lead-hurdling legs from Doha 2019 and Eugene 2021. McLaughlin’s more controlled pattern meant that she was able to rely on her stronger hurdling leg (right) in the more fatigued part of the race. It sets up a stronger finish to overhaul Muhammad—and ultimately delivers a world record.

McLaughlin had the perfect position (lane 6) to judge the race and the perfect “pacemaker” in Muhammad (lane 7). Knowing she would go out fast, she could track her adopting a 14-stride pattern that demonstrated her ease at switching between legs in the early part of the race. (Utilising a left leg lead also means that an athlete can run on the inside of the curve, saving distance/time. Karsten Warholm completed all ten hurdles with a left-leg lead in his recent world record—this approach could be worth up to 0.13 in the men’s event by some estimates.) Then after hurdle five, she puts together a storming series of 15 strides leading with her strong leg all the way home. Was this an approach designed to play to her strengths to beat Muhammad or is this part of McLaughlin’s evolution? Either way no woman has ever run a faster race in the event.

In Tokyo there will be another athlete they will both have to contend with. The emergence of the Netherland’s Femke Bol, who recently ran 52.37, means it might not be an all-American affair. Like McLaughlin, at 21 she could become the youngest-ever winner of the women’s event supplanting Nawal El Moutawakel, Morocco’s first ever Olympic gold medallist, who was 22 when she won the inaugural event at the 1984 Games.

It felt inevitable that McLaughlin would put together a world record race, just as it feels inevitable that she will break it again. She recently stated her ambition of running 15 strides between each hurdle, “that’s what a perfect race looks like”. If someone is going to put together that perfect race you would probably bet it would be her. But don’t be surprised if it takes another world record for whoever wins the gold in Tokyo this summer.

The unofficial splits were provided by ATLAS, a system powered by PrimeTime Timing and Karmarush. PJ Vazel did a masterful breakdown of Muhammad’s first world record from July 2019 which has informed this analysis.