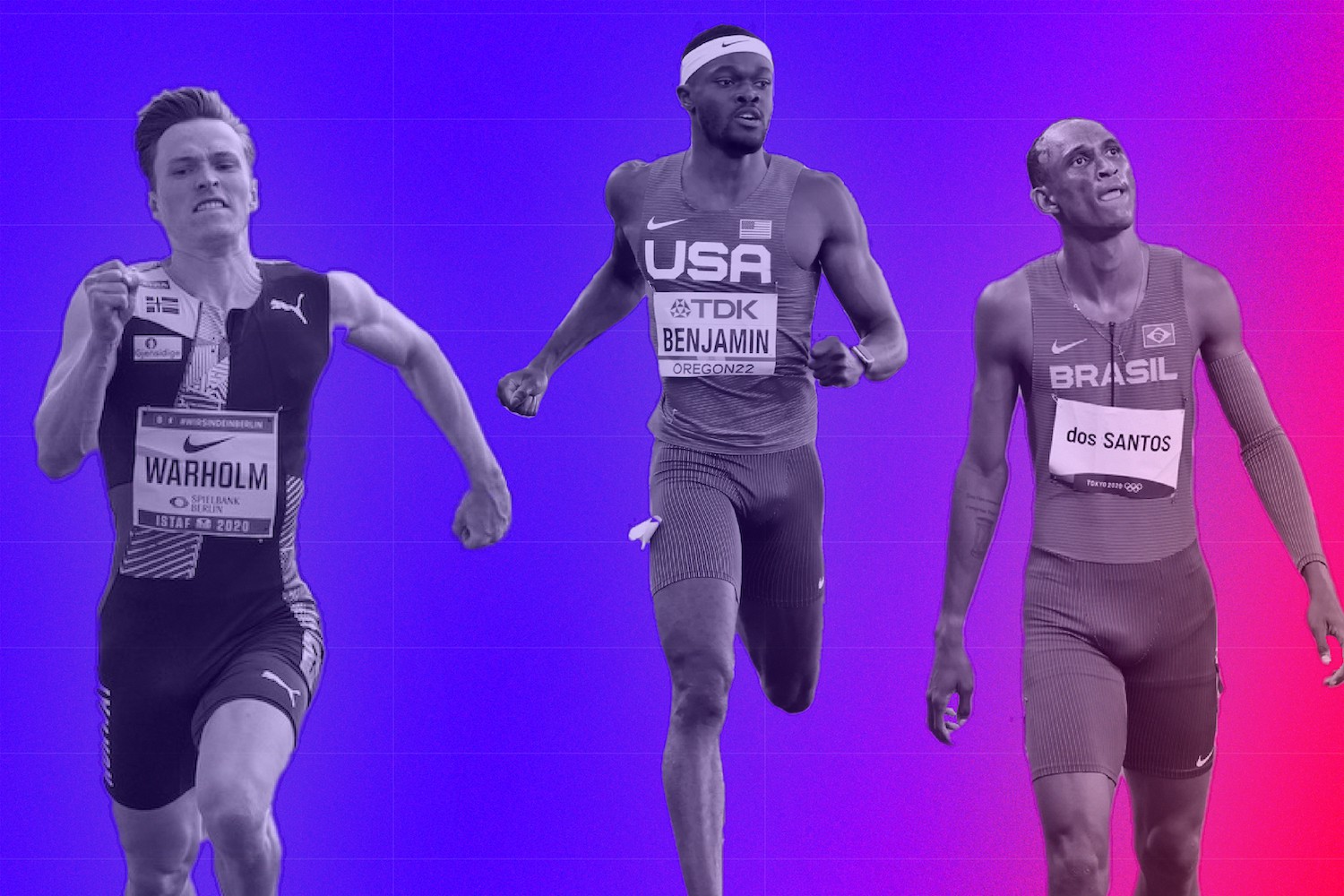 Today we’re looking at one of the greatest races of all time: the men’s 400m hurdles final at the Tokyo Olympics. It’s got splits, conjecture and reflects on what it could all mean for the 2023 outdoor season.

Karsten Warholm wasn’t born when Kevin Young set his 46.78 world record at the Barcelona Olympics in 1992. It wasn’t until he was 22 that another sub-47 time appeared on the lists (Abderrahman Samba, Paris, 2018).

The event was in the long shadow of past greats: Edwin Moses’ winning time in Montreal 1976 would have put him on the podium in every subsequent Olympics until Tokyo came around—a scenario unique to the men’s sprints and hurdles categories.

When Warholm broke 47 in 2019 he became only the third man to do so (pushed by Rai Benjamin, who became the fourth). It started his relentless race against the clock. Solo effort after solo effort—close but not close enough—palms pressed to his face.

We expect great things from great athletes. Warholm became the Olympic champion and lowered his world record—but what made this one for the ages was a collection of athletes ready to put it all out there to win; it was a race.

Five of the top 10 Olympic times were set in this final alone. 1976 Ed Moses wouldn’t have made the podium—and neither would 1992 Kevin Young. The three greatest male 400m hurdlers of all time met in one race, the stars had aligned.

Oslo, July 2021. Warholm sets the world record through a “perfect” race out in lane seven, 13 strides between the hurdles using his favoured leading left leg throughout and taking the victory by almost 0.7 seconds.

Tokyo, August 2021. One medallist runs 13 strides consistently between the hurdles and it wasn’t the Norwegian—Warholm performs a “double cutdown” to 15 strides to take the last hurdle with his left leg. Hurdles coach Ralph Lindeman (who sadly passed in 2022) said “very few elite hurdlers ever use a double cutdown transition in a race situation” since stride length must be drastically shortened before taking the hurdle. As in art and science, it can be “imperfection” that breaks boundaries.

Oslo saw a phenomenal time trial; Tokyo witnessed a man who wanted to win a race.

The balance of Warholm’s splits is clear. He gets out hard and commits. His split between hurdles one and two of 3.5 seconds was the fastest of any athlete in the race and you can see the decline sequentially as the race goes on.

Both are unofficial splits, but Warholm was also clocked at 21.5 for 200m in an official split in the Eugene World Championships final last year. In the lead up to that race the world-record holder had had a blighted season, however, what this tactical approach shows is that he runs one way. He always gets out hard, always leads with his left leg regardless of fitness levels. When he executes to his potential, he’s the best—but when he can’t, is he able to find another way to win?

“If you would have told me that I was going to run 46.1 and lose, I would probably beat you up and tell you to get out of my room” was Rai Benjamin’s response after the race.

It could’ve been different; these two athletes tackle races in different ways creating a dramatic choreography to get us to the edge of our seats. Warholm blasts out of the blocks and Benjamin makes a late surge.

You often see Benjamin make this surge around hurdle seven (we had his split at just under 4.0 but rounded it in the graphic). The gap between the two men grows in Warholm’s favour before maxing out at hurdle six (around .3 seconds). Then Benjamin reels him in. At hurdle ten—coinciding with Warholm’s choppier strides for his double cutdown—it was less than a tenth of a second. The momentum was Benjamin’s, neck and neck, charging off that final hurdle. It was Warholm who found something extra, a final charge.

“Benjamin was almost as brilliant; were it not for Warholm, Benjamin’s .53 improvement on the previous WR would still have been the largest improvement of the record in 53 years.”
—Jonathan Gault, Letsrun

Fine margins matter in these spectacular sporting moments. Warholm has an in-built advantage over Benjamin: his natural left-footedness. A left-leg lead is said to be worth .12 over the course of the race enabling an athlete to run on the inside of the curve (Lindeman). But what Warholm found in that final 40 metres goes beyond that, just as his 45.94 redefines the event.

Young’s world record stood for nearly 29 years and three athletes surpassed the mark in a single race. Alison dos Santos finished up with the bronze, but there is gold in this athlete.

At only 22, he became the world champion a year later beating both Benjamin and a not-in-form Warholm in Eugene. His Tokyo race hinted at this potential and in 2022 he stepped up again to optimise his performance.

In Tokyo, he switches his lead leg and strides (a dual alternate) at hurdles four and five, ending up with the fastest finish of the race. Out of the three medallist he is the only one who switches his lead leg, which may show a tactical flexibility over his rivals, or that perhaps he hasn’t perfected his race to lead with his strongest leg (if you believe the single-lead leg/13 strides approach is superior).

His final surge secured the bronze with a massive PB, but ultimately he was too far out of it to be in contention for the gold. And, like Benjamin, there’s no ignominy finishing third in one of the greatest races of all time. But what we saw from dos Santos in 2022 shows a desire and ability to be at the top of the podium.

In the opening Diamond League race in Doha, the Brazilian ran a 10.7 official split for the first 100m. To put that into context, it’s the same unofficial split as Wayde van Niekerk had for the opening 100m of his 400m world record. He fades afterwards, but the intent is clear. His commitment to the beginning of the race could be seen throughout his racing in the 2022 season.

Looking at his half-way splits we see the difference too. In Tokyo, our splits have him at 22.3, while in the Diamond Leagues that season he was averaging 22.75. Fast-forward to 2022 and his world championship 200m split was 21.67, with a Diamond League average of 22.44. That’s .6 faster in the championships and .3 faster on the circuit. His improvement across the seasons—with a new PB of 46.29 in Eugene 2022—was finding improvement in the first half of the race. He had learned something from Warholm.

Unlike the Norwegian though, dos Santos has tactical flexibility too by being able to switch lead legs. Watching back several his races from 2022 he demonstrates versatility matched with fast times. In Stockholm he completes the second half of the hurdles with his left leg—like he did in Tokyo. While with his run in Silesia he inverts his approach completing the last five hurdles leading with his right leg. At a critical moment this flexibility could be the difference between gold and silver, perhaps even a world record.

While the discussion will continue of where this ranks in the pantheon of races, this race has started something and for all these athletes it’s not about what’s done, it’s about what’s next. Bring on Budapest, bring on Paris.