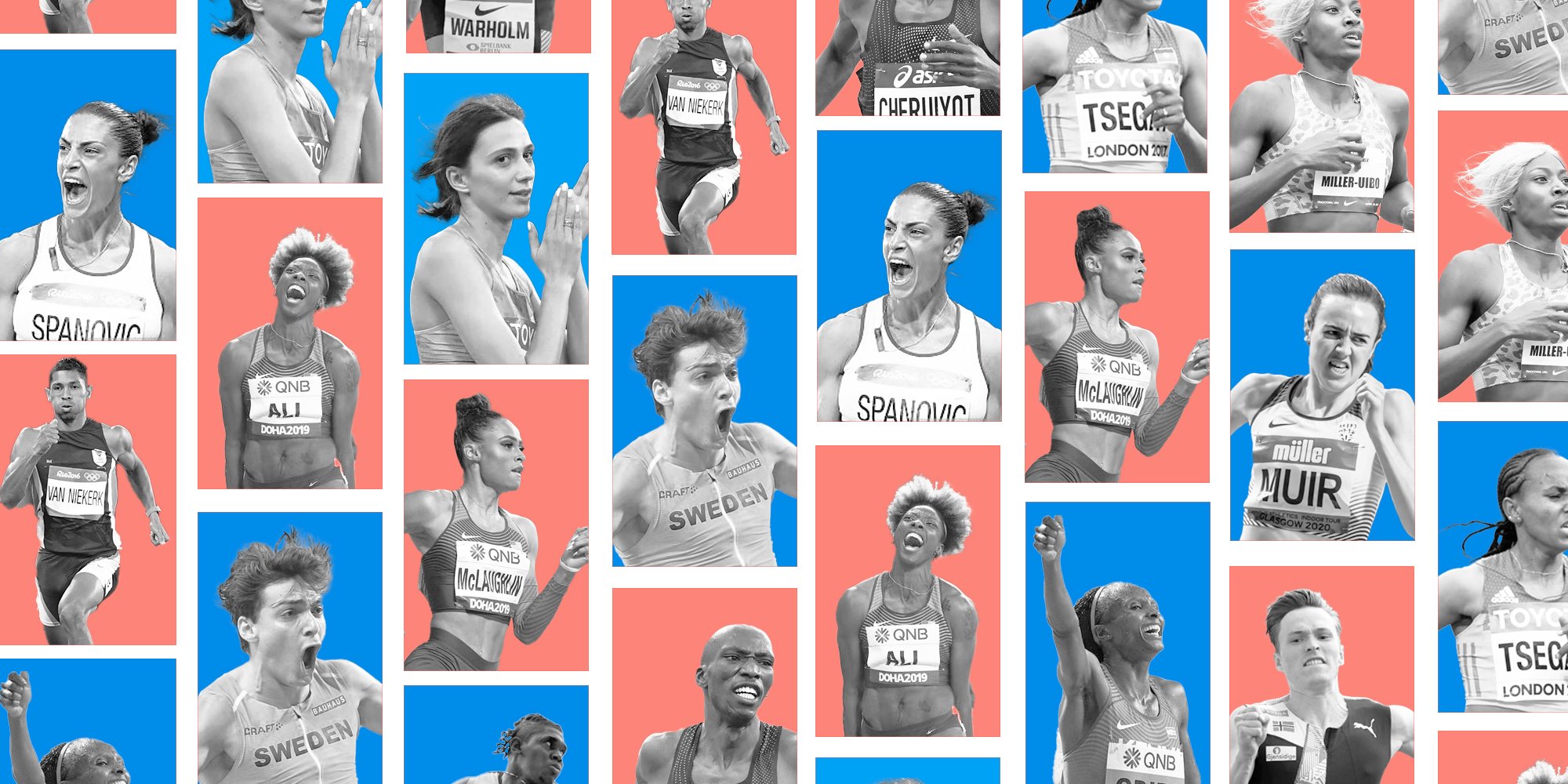 Times, heights and distances are the foundations of track and field, but it’s competition that really makes it a sport worth watching.

We have developed a new Competitor Index (CDX) to rank the “top competitors”. Put simply, the CDX looks at how an athlete performs relative to their past performance. If an athlete performs better than expected, their score goes up. If worse, it goes down.

Using 2017 Diamond League and London World Championships data as a baseline, the CDX has over 1,500 athletes across the Diamond League disciplines, with over 10,000 competition positions analysed and scored.

You can dive straight into CDX and see what it’s all about here.

How we figure this all out…

When athletes compete in an event, an expected position (xPos) is calculated for each athlete in the field based on their current score.

Then each athlete commits a “stake” of 10% of their score to this position. This will be “won” by the athlete that actually finishes in that position.

For example, in the 100m hurdles 2019 Diamond League final in Brussels here was the expected top five and their stakes.

If an athlete performs as expected…
They will get their stake back and there will be no change (although there is a bonus for the winner).

If an athlete performs better…
They get their original stake back plus the stake from the position.

If an athlete performs worse…
They lose their original stake and gain the lower stake of their actual position.

You can see this in our example of the women’s 2019 Diamond League 100m hurdles. The actual result played out like this, with the following shifts in points: 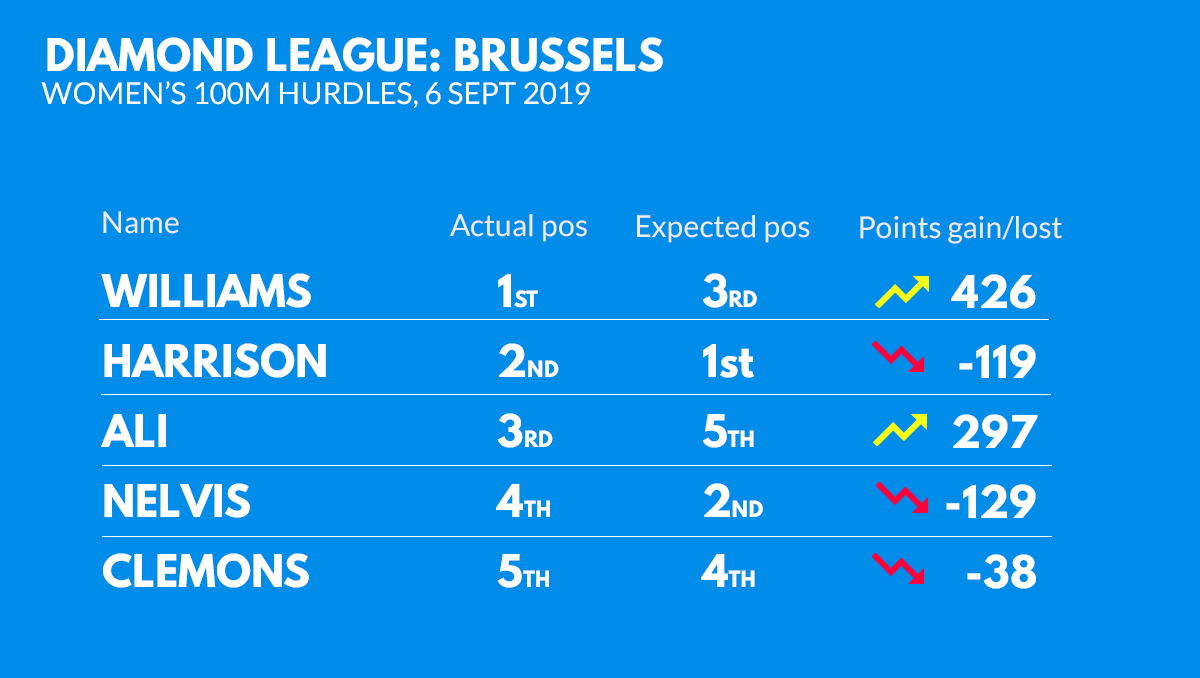 Kendra Harrison finishes a respectable second, but she was expected to win. This means she loses her stake (426), but gains the second-place stake (Sharika Nelvis’ 307), resulting in a net loss of 119 points.

Big wins for Danielle Williams and Nia Ali who make gains by performing better than expected. They get their original stakes back and then stakes for first and third respectively, boosting their scores.

Note: marks don’t matter in the CDX
The CDX algorithm is time/height/distance blind. It doesn’t care if an athlete breaks a world record; rather it’s about the quality of the field they have beaten. The data is comprised of Diamond League and World Championships results and favours athletes who compete regularly in these elite competitions.

Other rules and caveats

Expected winners gain a bonus
The algorithm does not reward athletes who perform “as expected”; they will only receive their original stake back. That is, unless an expected winner wins. In this case, the winner receives their stake back and the equivalent of the second-place stake. This means the higher quality the beaten field, the bigger the points bonus. Check out Shaunae Miller-Uibo’s 200m chart as someone who is often the favourite to win and takes on consistently high-quality fields.

Championships: the stakes are higher
While Diamond League meets follow the 10% stake, stakes increase at World Championships and the Olympics. A World Championship final has stakes at 25%, while an Olympic final is a 30% stake. This means that significant points can exchange hands at the major moments.

Diamond League data is not the whole picture
The use of Diamond League data, the sport’s top-level meets outside of the major championships, has some consequences for the shape of the index. Notably, there are not rankings for the hammer or multi-eventers. We are open to suggestions on how to rectify this.

World-class American athletes can also be late arrivals to the Diamond League circuit. Take a look at Sydney McLaughlin’s chart as she makes up for lost time, or Grant Holloway for a championship performance to give him a jolt up the list. The CDX also starts at a point in time. CJ Ujah had just become the 100m Diamond League winner in 2017 and began with a big score. He has consistently performed below par and has subsequently lost over 30% of his points since then. Many of these anomalies are starting to fade as more data is added.

“New” athletes
An athlete needs two performances in an event in the past two years to register on the CDX. If an athlete doesn’t have an event history on CDX, then they are given 1,000 points to start.

“Write downs”
Each year if an athlete has raced very little, under two times, they will receive a reduction in their points between 10-30%. This is a ranking that rewards competing regularly against quality fields. There have been no write downs from 2020 to reflect the restricted activity during the pandemic.

Errors…
With any project of this size, there will be errors. Sometimes a change of name or nationality can catch us out. It can even be an inconsistent spelling of an athlete’s name, or just a missed result.

One of the best aspects of CDX is its cumulative nature. This does, however, make it very difficult to untangle old calculations that become the basis for numerous subsequent calculations. For this reason results will not be tampered with retrospectively if they subsequently change.

Take a look at the charts and see what you make of it. Feedback is also welcome.