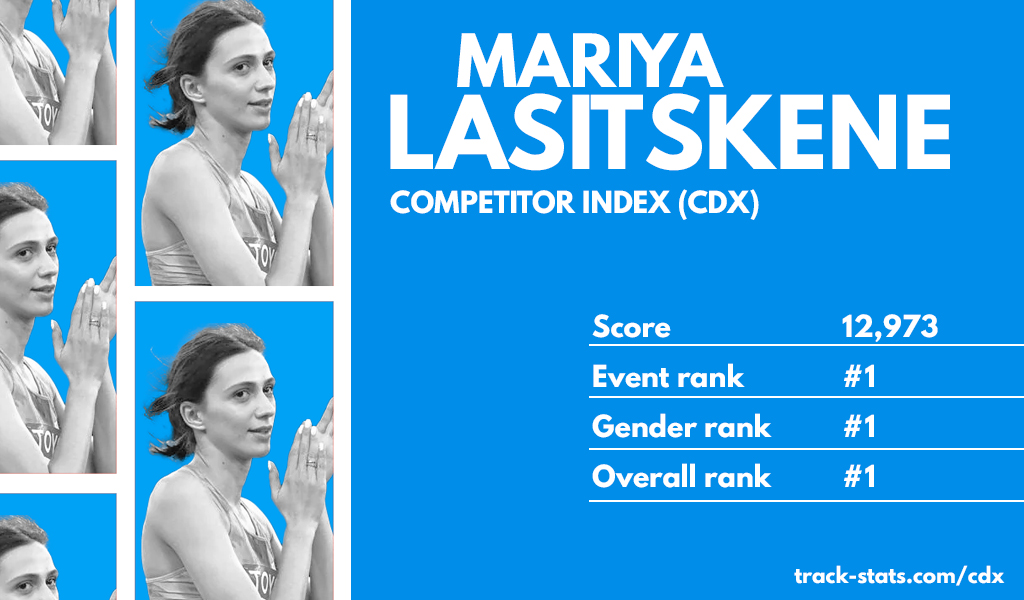 In Gateshead very little went in favour of the favourites. Perhaps it was the rain, the cold—or early season rustiness following a limited 2020 season.

Mariya Lasitskene’s fourth-place finish in the high jump was the equivalent of a small earthquake in our new Competitor Index (CDX). Lasitskene is the top-ranked current competitor, not only in the high jump but also across all events both men and women. Her 14,595-point high achieved in September 2019 is the highest score ever recorded.

The CDX has so far crunched four years of Diamond League and World Championships data to rank the “best competitors” in track and field. It compares expected results against actual results. Where an athlete performs better (or consistently beats high-quality fields), they accumulate points. Worse, they lose points.

Read more about CDX or view the rankings

Lasitskene’s readiness to compete and consistently beat the best in track and field’s premier competitions is why she has reached the top (she rarely misses a Diamond League meet for example). It also means that any athlete that is able to beat her can gain significant CDX points.

It was Kamila Licwinko yesterday (1,421 gain), while Mirela Demireva gained 1,322 in Rabat in 2018 and Vashti Cunningham picked up 1,459 with victory in a 2019 World championship qualifying round. These have only been minor setbacks for Lasitskene who has returned quickly back to winning ways.

How long will she remain on top? Her consistency puts her on another level, but there are plenty of rivals waiting in the wings in what can be one of the most competitive and unpredictable events. We’ll see how this season unfolds.