Van Niekerk was on for the record at 300m 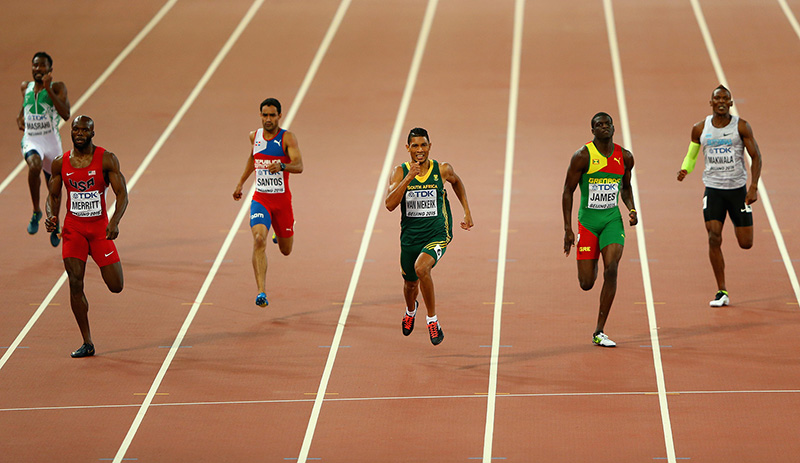 This post is from the 2015 world championships in Beijing. For van Niekerk’s world record splits in Rio, see here.

The stagger around the track and the sometimes deceptive TV angle views call for a time analysis to get a clearer idea of the evolution of 400m races. So here are the 100m intermediate times for each finalist, from 30 fps video analysis, using several views for each 100m checkpoint of the lap.

These are electronic times rounded to the nearest tenth, since the low frame rate doesn’t allow publishing times to the 100th. For example, van Niekerk’s 300m time was in the 31.3 high ranges and rounded up to 31.4*. Caution: don’t use the screen clock displayed on the TV broadcasts, it’s not always synchronised with the pictures! For Beijing, the delay was 0.4, as the clock showed 31.0 as van Niekerk passed over the 300m check point.

In Beijing, four men were faster that the world record pace at 100m and 200m, and with 100m to go, van Niekerk and Merritt were still under MJ’s record. The fastest ever first 100m ever recorded is 10.6 by Tyson Gay during a 45.05 race in 2010, faster than van Niekerk’s 10.8, however the South African now tops the list at 200m and 300m intermediate times. The question now is whether he can put together a race over the whole distance and take the world record.

Footnotes: Brown’s time is slightly different from what was released just after that race, but I used the corrected figures published by the biomechanical team in its latest report. Pierre-Jean has been able to provide a more precise 300m split for van Niekerk following the original publication of this article. He went through 300m in 31.36 (Merritt 31.63). The top intermediate splits table has been updated to reflect this.